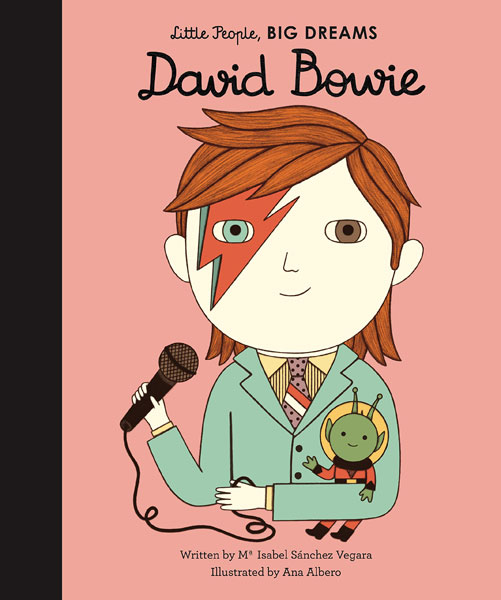 I wish there were more details on this, but the confirmation of David Bowie – Little People, Big Dreams is still something to celebrate.

The Little People, Big Dreams is an ongoing one and has featured everyone from Marie Curie through to Coco Chanel and Ella Fitzgerald. But it has been a female-dominated range in the past. Until now, that is.

A new set of titles is about to launch, with the likes of Stephen Hawking and Muhammad Ali making the cut this time around, as well as the Thin White Duke himself.

The underlying theme is the same for the new books as the past ones, exploring the lives of outstanding people, from designers and artists to scientists and activists. All of them achieved incredible things, yet each began life as a child with a dream.

The board books are told in simple sentences, perfect for reading aloud to babies and toddlers, while the hardback versions (like this one) are ore expanded stories for beginning readers.

Of course, Bowie’s life hasn’t been without controversy and some details will not be child-friendly. But thankfully this book has overlooked some of that, with the content as follows…

As a child, young David had a head full of songs and ideas. He was inspired by the pop and mod scenes in Britain to pick up the saxophone.

After earning his stripes in some of the coolest bands in London, David splashed onto the solo scene.

His songwriting talent and musical skill made him one of rock and roll’s all-time greatest artists. This moving book features stylish and quirky illustrations and extra facts at the back, including a biographical timeline with historical photos and a detailed profile of the musician’s life.

Yes, a few adults might want to pick this one up too. But it is aimed at kids and would make a great gift for your own children or someone else’s. The book is available to pre-order now ahead of the 2nd May shelf date, selling for a discounted £7.19.

Find out more about the book at Amazon